Visually, this is a book of photographs showing Mom and Pop shops named “Something World” where “Something” is a noun like bagel or crocodile or condom. The images, I hope, are interesting, well-crafted and aesthetically pleasing. The “stars” of the show are the shops and their names but if you look closely, you will often discover other interesting bits and pieces like the missing letter “l” in “Baby Wor d” or the dour bicyclist rolling past “Froyo World” draped in a pink and white boa or the full moon rising over “Pet World.”

Taking a step back though, the contrast between the modest actuality of these shops and their aspirational names emerges and often adds a touch of humor. One has to smile at a rickety roadside “Farmers World” (“Growing since 1978”) offering a few bags of onions, carrots, cabbages and potatoes.

Ultimately, the goal of this book is to celebrate the pride, gumption, imagination, humor (and, OK, maybe a little hubris) of these proprietors. I would love to have been a fly on the wall when Ashley resolved to name her shop “Rug World” or when Mary settled on “Furniture World” or Dan opted for “Tree World.” Who wouldn’t want to roll out “Bunk Bed World” or work at “Wig World” or shop at “Spandex World?” It’s so aspirational! So entrepreneurial! So American! Actually, saying “So American!” is not hyperbole. I’ve been to a dozen other countries since starting this series and have never seen a single shop named monde or mundo or anything comparable. A few years ago, a friend pointed me to a web site for “Semen World” (bovine artificial insemination service) in Tipperary, Ireland but it went out of business before I could get there.

Individually, these images are interesting enough but only as a collection do they illustrate the hope, wit, imagination and pluck of the owners. That’s why I created this book.

My wife Tricia and I were driving home from a vacation in Acadia National Park when we passed a roadside hot dog stand named “Dog Eat Dog World” in Waldoboro, Maine. We laughed and drove on but the more we thought about it, the funnier it got. The “dog-eat-dog world” pun is clever, but the gumption needed to name a roadside hot dog stand in Waldoboro a “world” impressed and intrigued us both. Why call it a “world?” “Dog Eat Dog Trailer” would be more accurate but admittedly much less appealing! Was it hope or humor or hubris (or all three) that inspired Mom and Pop to create a new “world?”

Whatever the reason, we soon realized that we had to go back so made a U-turn, grabbed the camera and took a few photos. Only later, when looking at the images on a large computer monitor did I notice the other oddly funny elements. Why are the hot dogs “worldly?” Have they been around? Why is the huge sign hanging from a rust-stained torpedo? Are dual phallic references a marketing ploy? Who is the target audience? Should they add stuffed eggplant, banana split and carrot cake to the menu? Inquiring minds want to know!

Only later did we come to learn that there is a world of “worlds” out there. “Dog Eat Dog World” was only the beginning of the “Hyperbole World” project. Little did we know that spontaneous U-turn would lead to this book. 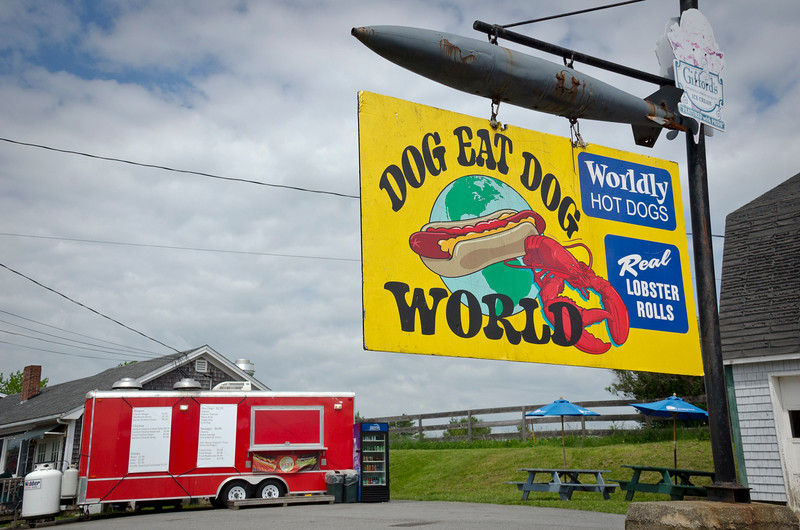